If you say Azul, you have to say Carlos Bica as well, hardly anyone in jazz is connected to a single band like the Portuguese with this unique trio. Bica started his trio Azul in the nineties, incorporating tenacious Berlin guitar genius Frank Möbus and fascinating New York drum wizard Jim Black into a unique ensemble concept.

Their debut album, Azul, recorded for PolyGram, features special guests, singer, Maria João and, trombone player, Ray Anderson. It was voted “Best jazz record of the year” in Portugal in 1996 and is widely accepted as one of the best Portuguese jazz albums ever done – a milestone. Carlos Bica & Azul has been touring and pleasing audiences worldwide for the last twenty years.

Azul’s following albums were: Twist, Look What They’ve Done To My Song, Believer and Things About. Twenty years later, celebrating this Portuguese-German-American band’s 20th anniversary they release More Than this.

Their new album More Than This accurately describes their status quo. This new release reflects the same music that their audiences have learned to love since the very beginning and delivers beyond those expectations. One can say that this new album sounds almost as if it was the very first time the trio composed and recorded together, but it is rife with the veteran wisdom one earns when acquiring the right to state something, instead of merely “proposing” it. So, it comes down to this: on their sixth album, the trio has managed to record their best work ever. And yes — it’s a gem.
– (R.E.P.)

Azul in Ljubljana is the title of Azul’s latest album, recorded live at the Ljubljana Jazz Festival 2015 and released in July 2018 by Clean Feed Records. 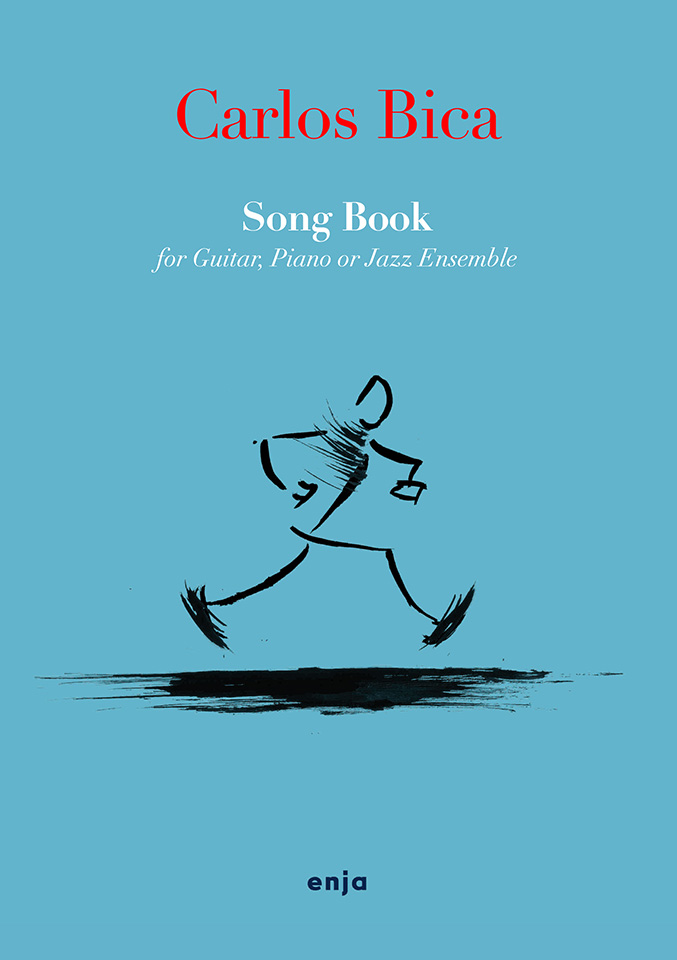 Song Book is a compilation of some of the most significant pieces of Carlos Bica & AZUL’s repertoire (feat. Frank Möbus and Jim Black) recorded on CD by this trio so as well by other musicians and formations.

I am extremely pleased for the publication of my first songbook. From Simple Melody, which was written almost 20 years ago, to Believer, a more recent piece, so much has happened. But as the saying goes we only write one song in our lives.

Bica has already established himself as one of the most inspired composers in modern jazz, but here he has treated himself to producing a string of pearls… The CD closes with Sonho de uma manhã de Outono but one wants to press repeat and listen to nothing else the whole winter through.
– Time Out Lisbon, Jose Carlos Fernandes

The Magic of Composition. For ten years double-bass player Carlos Bica’s trio Azul has fascinated its listeners. Living in Berlin, Portuguese Bica again and again creates a music that seems familiar yet excitingly transformed at the same time. On their ten-year anniversary the trio on Believer once more conjures their delicate balance between twinkle-toed poetry and a slightly off-the-wall humor… Oftentimes the listener is not even aware of the magic of the composition until the music has faded. However, there is always a touch of irony breaking the magic, as well as some cool stings delivered by the featured artist DJ Illvibe. The sound of the recording matches the music: it is as much poetical as it is refreshingly natural.
– Stereoplay, “Klangtipp”

A permanent restlessness. With their fifth album, Carlos Bica & Azul reached the peak of maturity, located somewhere between jazz, pop and a total devotion to song. Carlos Bica, the bass player and composer, has managed to preserve an enviable creative vitality throughout his entire career. Moved on by inquisitive restlessness, he continues to search for the perfect balance between form and abstraction, between the magic of improvisation and sublime lines of song. With the universal appeal of his music and a rare mastery in song writing, Bica reasserts himself as one of the greatest names in European jazz.
– O Público, Rodrigo Amado

Azul is one of the most significant and fertile trios of this moment next to other guitar-bass-drums trios like that of Bill Frisell, bassist Tony Scherr and drummer Kenny Wollesen, of Julian Lagge, bassist Scotte Colley and Kenny Wollesen or of Jakob Bro, bassist Thomas Morgan and drummer Joey Baron respectively Jon Christensen. More Than This is what it says. It is ultimate emergent melodic music on an unusual high level of variation that makes the song sing in captivating ways.
– Allaboutjazz, Henning Bolte

Things About is excellent proof that three virtuosic musicians can put their egos aside to play what is required and befits these poetic musical gems.
– musicaquecuelgan.blogspot.com

Pure serenity and foresight. There is no need for anything else. In times of a global fun society and arbitrariness (even in Jazz) it is good to still have islands like the music of Carlos Bica and Azul.
– Jazz Podium

Believer, the new album of the remarkable trio Azul, shines neon blue and in a jazzy-melancholic way with ingenious spaces, telling about the other side of the wind. These are songs without words, relaxed soundscapes, whose mediterranean grooves are easily able to hold the balance between dramatic and playful art… Music for eternity.
– “CD of the week”, Der Schallplattenman sagt

13 songs that fascinate in their sensual melancholia and radicalism that pushes the boundaries. However, they also come across with such a familiarity as if they were recordings of thriftily arranged evergreens… The Portuguese writer Fernando Pessoa once wrote: “Fado is neither joy nor sadness, but the independent in-between.” This might be the best-fitting description for one of the most touching albums of this year.
– Jazz Zeitung

Melodic landscapes that could have come from Radiohead or Tortoise.
– Berliner Tagesspiegel

The Portuguese Carlos Bica is not only a brilliant double-bass player, he also represents a highly individual band concept…
– Stereo, 5 stars

As a guest on the turntables DJ Illvibe discretely maintains the secret of the album’s poetry.
– Rolling Stone, 4 Stars

Carlos Bica did it again. Believer is one of his best and coherent works. It is Bica’s fourth record with his acclaimed project Azul. Two musicians that are regulars of the musical personality of the project accompany Bica: guitarist Frank Möbus and Drummer Jim Black. Furthermore DJ Illvibe (alias Vincent von Schlippenbach) on turntables contributes to the album. Each time we listen to the album we discover new odds and ends as well as subtle details in the arrangements, elements that help us with the (re)construction of the extremely solid underlying music concept. Carlos Bica claims that the focus is on the music not the musicians. And that is noticeable, especially in the way the musicians create every mood and every melody as well as the open spaces that allow for the songs to breathe their own rhythm which is so essential. Bica’s music is highly original and although the different influences are clearly recognizable – from alternative rock to Fado, from pop to contemporary classical music or folk –, it never becomes a musical “pastiche”. Quite the contrary, as all elements converge to a universal piece of art that communicates through jazz.
– O Público

Azul is the most perfect meeting of these three universes. Modernity, creativity, simplicity are adjectives that we can use to characterize this CD. Look What They’ve Done To My Song is truly one of the most exciting records I have had the chance to listen to in a long time.
– All Jazz

Carlos Bica composes with great melodic inspiration, Frank Möbus artistry enables the melody to stand out, and Jim Black’s genius reveals itself in delicate timbres; together they have produced the most serene and lyrical recording of the Trio Azul to date.
– Lisbon Time Out, Best Jazz Album 2011

It is an achievement in itself that Carlos Bica and his Trio Azul – with Frank Möbus and Jim Black – have never produced a less than extraordinary recording. Once again, Things About does not disappoint and shows Bica as an enviable melodic composer.
– lojadupondedupont.blogspot, Top 10 Jazz CDs of 2011